In contrast to the early origins of squatting toilets, the Western toilet (water closet) is a relatively recent invention. Its origins can be traced back to the 19th century, when it was adopted in England, before spreading to other Western countries.

If you live in the West, you probably have never used or even seen a squat toilet. The idea that the best toilet being a squatting one might seem absurd at first. But it is true.

It really is a cultural issue. The sitting toilet was an effect of the increasing class and racial stratification of the Victorian Era in England (1837-1901).

The porcelain throne was justified by the idea that sitting was more dignified than squatting which was the 'habit' of natives in the English colonies. Sitting on this "throne" was seen to be more dignified, and hence more suited for aristocrats.

In short order, this new toilet took root and spread. Yet, the design of the new toilet had always been a bone of contention.

For many decades, virtually every physician and physiologist who has ever troubled to write on the subject agrees that squatting is the most natural and sound posture for emptying the bowels.

They have blamed the sitting toilet for the high incidence of serious ailments and diseases, such as appendicitis, constipation and colon cancer.

These ailments and diseases were rare before the mid 19th century, when the majority have always used the squatting position (except for royalty and the disabled). 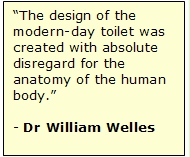 Compared with the rest of the world, people in the Westernised countries where sitting toilets are well-entrenched have much higher rates of appendicitis, hemorrhoids, colon cancer, and other bowel diseases…

Consider this Apr 1979 report published in the Israel Journal of Medical Science:


"The prevalences of bowel diseases (hemorrhoids, appendicitis, polyps, ulcerative colitis, irritable bowel syndrome, diverticular disease, and colon cancer) are similar in South African whites and in populations of prosperous western countries. Among rural South African blacks with a traditional life style, these diseases are very uncommon or almost unknown."
If Squatting is Better, Why Didn't Anyone Speak Up?

In those days, no one could have knew about the impact of the water closet on the health of the population... As mentioned earlier, those who were uncomfortable with this new invention were compelled to keep silent.

In Victorian England, bodily functions were considered unmentionable. Also, how could a citizen openly criticise a toilet that was used by Queen Victoria herself? (Hers was a gold plated one.)

So, like the Emperor’s New Clothes, the sitting toilet was tacitly accepted…


An indication that all was not right was the immense popularity of "squatting stools" sold by the famous Harrods of London. Buyers used these foot stools to raise their feet and bring the knees closer to the chest – a crude attempt to imitate the squatting position.
Conclusion

We don't really know why or what had caused the Western world to go for sitting toilets and not squatting ones. After all, both could have the same flushing capabilities. It could be that the early toilet inventors found the sitting posture to be more "dignified", and hence more suited to kings, queens, aristocrats than the traditional squatting position used by natives in the colonies. And so they go out to create what they think is the best toilet, not knowing the terrible consequences... The tragedy is that many remain oblivious to the serious health threat posed by sitting toilets, and its association with serious colon, bladder, prostate and pelvic health problems.

Clearly, the time has come to expose the sitting toilet for what it really is...an ergonomic nightmare and health threat. And to educate and re-acquaint every man, woman and child with the benefits of squatting for waste elimination.

A sitting toilet may look pleasing to the eye, but it is an ergonomic nightmare that can induce disease in the long run. A squatting toilet, far from just being the modern equivalent of a 'hole in the ground', is actually the best toilet that money can buy.

But act quickly. For the longer you continue to sit, it is going to be more difficult for you to squat later on, as explained on the page on squatting facets.

For those who don't have a squat toilet but wish to squat, there are a number of options. For many, the most practical option would be to use a toilet squatting platform or converter.

Have A Great Story About This Topic?

Do you have a personal account about the topic discussed on this page? Please consider sharing it. You can be sure that many people in the world would love to read about and greatly benefit from your experience. It's easy to do. Just let your words flow. Thanks for sharing!

What Other Visitors Have Said

Click below to see contributions from other visitors to this page...

No need to buy any fancy devices at all

just squat on the floor, take any disposable sheet-like material with your two hands, hold them to your rear, and catch your stools with it. If we want …

Step up toilet lets you squat with western toilet

Sitting toilets a recent invention? What about the famous Roman toilets where citizens sat together in a large room? They're even found in Israel's …

Let 'er rip - squatting is best! Not rated yet
One of the most enjoyable bowel movements I can remember was visiting the ruins of an abandoned hotel and relieving myself (in the squatting position) …

Sitting, squatting, use of water Not rated yet
I would like to share whether it is squatting or sitting removing should be our focus. In my view I think that the shower is the best. Just put the …

Birdman Not rated yet
My wife laughed her head off when she walked in on me one day. She never knew that I would perch on top of the toilet bowl to do my dumps. I don't …

Squatting - this topic should be read and believed by all mankind Not rated yet
All my life I new that Thomas Crapper, the inventer of the modern colon crusher (sitting toilet), 'craped' on all mankind. But my experience with squatting …

The Best Toilet Converter in The World Today!

All about Life,
Hope and Truth...

FREE:
One of the most
astounding books
you will ever read
in your life!